Essity at a Glance

Purpose and Vision Our Beliefs Our History

Our Business Model Our Strategic Priorities

Essity in the World

How We Do It

Why We Do It

Our Journey to Net zero

Commitment to Our Employees Diversity, Equity and Inclusion Learning and Development Why Choose Essity?

Women in IT Career Stories

Essity as an Investment

"Women aren’t born ashamed of their vaginas and vulvas. I want to do all I can to stop them from ever becoming so." 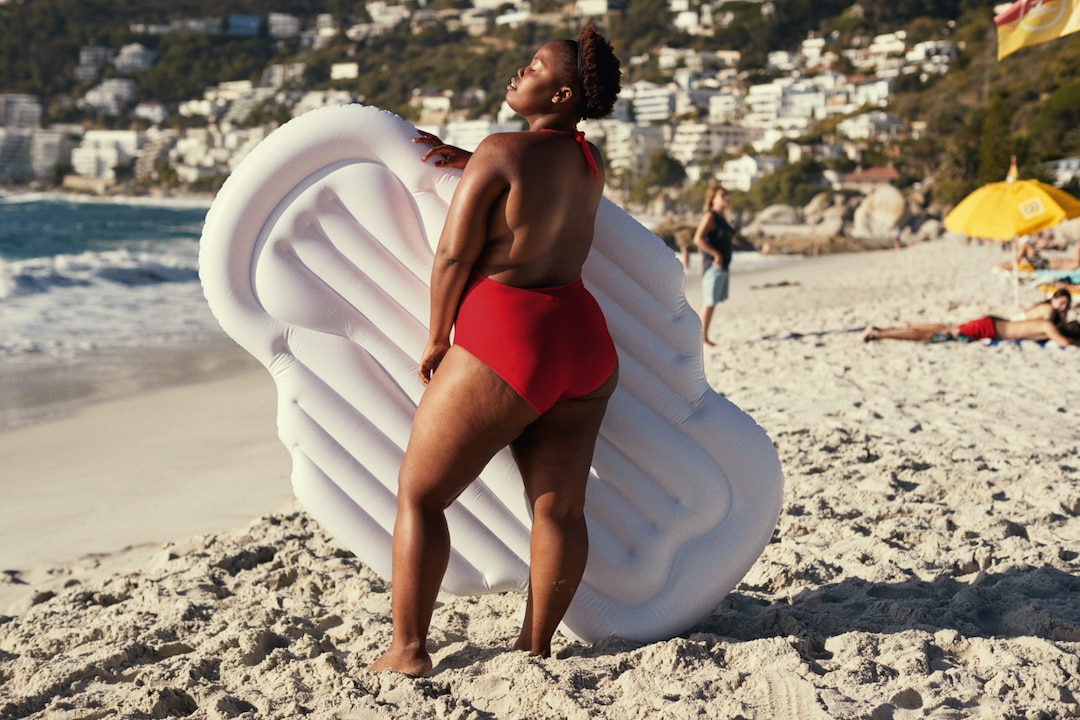 "Our global FemCare brand identity relaunch is another step in our commitment to our brand purpose - breaking vagina and vulva taboos so women can live the life they want without fear or shame", says Tanja Grubner, Global Marketing & Communications Director for FemCare. Here she tells us her story.

At Essity FemCare (better known as Libresse, Nana, Bodyform, Nuvenia, Saba, Nosostras or Libra), we have a purpose and a commitment to breaking the taboos around women’s intimate areas that are holding them back. Girls aren’t born ashamed of their bodies. But, somehow, society and culture carry such taboos and objectification of women’s bodies that they make women lose ownership of their genitals and fill them with ignorance and self-loathing. Our society has systematically and historically hidden, shamed or sexualized women’s bodies – leaving no space for normal, positive representations and relationships with ourselves. With our campaigns like RedFit, BloodNormal and Viva la Vulva, we have come a long way, normalizing periods and vulvas, but there is so much work still to be done and we won’t rest until the world is rid of these harmful taboos.

Today, I’m excited to share the major relaunch of our brand identity; a development in our commitment to representing women’s bodies without shame. Even during such difficult times and amidst our measures to support women impacted by COVID-19, it is important we carry on the fight to break down the outdated stereotypes and intimate taboos that continue to hold women back. But first let’s go back a little...

There are upsetting truths that you just can’t ignore

A few years ago, as we wanted to really understand the taboos and negative experiences women go through because they have periods, vulvas and vaginas, together with our strategic agency partner Kitchen8 we conducted extensive research and social listening with women from first periods to menopause as well as men 16-55 years throughout the world. The results were deeply upsetting1:

There are upsetting truths that you just can’t ignore. When societal stigma around women’s bodies and periods has such an impact on their health, confidence and entire lives, we couldn't just tell women to be confident. I felt it was our responsibility to help create the very conditions for women to live better lives. This has meant a lot of fighting and risk-taking.

The heritage of our category certainly wasn’t helping...

Despite selling products that interact with the vulva and vagina, the Feminine and Intimate Care industry had been too afraid to talk about it, preferring to represent happy young girls dancing around on their periods in white pants or like dirty engines with a leak or an odour that needed to be fixed. It quickly became clear that all the category was perpetuating shame that women felt about their own bodies. When we looked around in culture, it wasn’t just that periods and women’s intimate bodies were treated shamefully, it was that they were largely ignored, hidden, silenced, but mostly didn’t exist at all. It made me really angry. Why is something as normal as a period treated like a class A drug? From there we decided we needed to be the lighthouse brand.

So we went there

We needed to attack more boldly than ever, tackle the taboos head-on. Our first taboo-breaking campaign, Red.Fit, tackled periods in sport and went live in the UK in 2016 before going viral globally. Next was BloodNormal in 2017 — a boundary-pushing, ban-defying campaign showing periods as normal and in their true color – red, not blue. It dropped a big red bomb in our sanitised category. Then there was Viva La Vulva in 2018. It dynamited the myth that there’s a so-called ‘perfect’ vulva, showing that the only imperfect vulva is the one that is unloved, hidden and repressed.

We faced some hurdles at first…

Initially, we faced huge challenges to get BloodNormal and Viva La Vulva aired. No platform or broadcaster would air BloodNormal because it shockingly used red liquid to represent periods instead of the traditionally accepted blue.  But our advertising agency AMV BBDO together with our marketing teams around the world worked tirelessly to prove that this censorship was an injustice, they had to fight scene by scene to see the bans lifted.

But women loved it

When the campaigns launch, women love them from all over the world, saying things like “just in time for my daughter not to be ashamed” and “finally a brand that respects me”. We've even been acknowledged by the Buenos Aires Government for pushing the gender equality agenda through representations and supported by the French Secretary for Gender Equality. We’re getting involved in school programs and educating more than a million girls and young women about puberty, bringing boys in on the conversation, and donating our products to fight period poverty. And we’re very proud to see that together, our three campaigns have won over 260 creative, strategic and PR awards, among which the Glass Lion Grand Prix that rewards ground-breaking work for equality.

Time to be proud of who and what we serve

Today, we’re rolling out our new global brand identity, which would not have been possible without our agency Interbrand. Our pink ribbon and sparkles were not only outdated, they were a euphemism, reinforcing a stereotype that women’s periods are necessarily a delicate and wonderful experience, and stood in the way of our embracing proudly what we’ve been about, without shame: women’s vaginas and vulvas. So, our bold V now sits proudly and prominently on the front of all of our packaging and across our customer touchpoints. It’s a symbol as much as it is a statement. 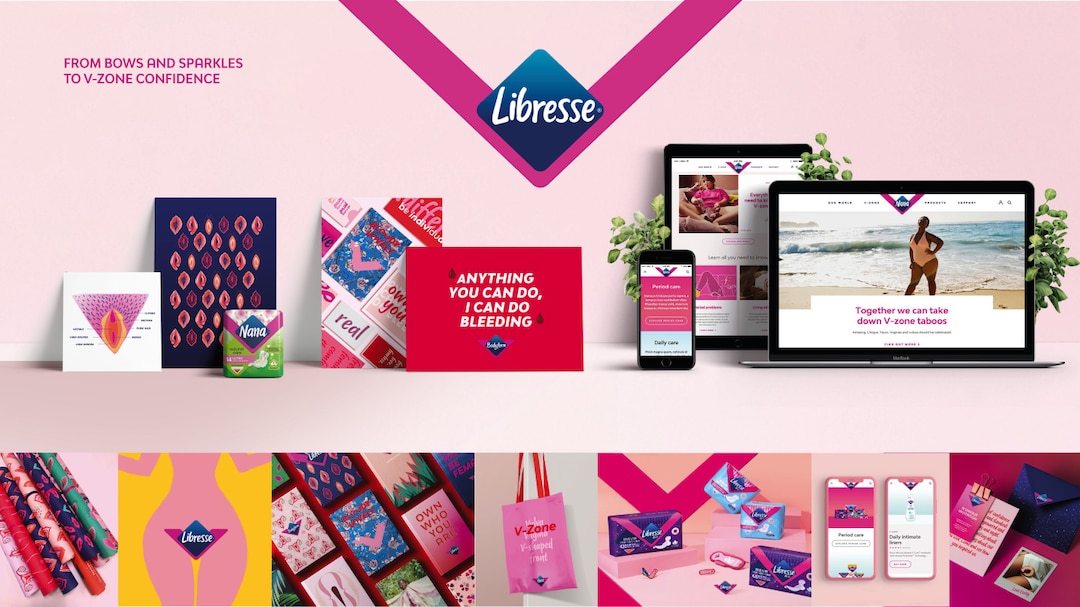 And to represent the different flows women experience through their periods, we’ve added a V-flow indicator on our packaging: It’s filled with red, acknowledging women’s flow isn’t just a couple of drops and is certainly never blue.

We’ve had fun along the way, sure it’s driven us insane, whether it’s from authorities telling us that cupcakes are too offensive for TV or our periods being compared to feces. But taboos don’t break themselves. We’ve shaken up subjects that have for too long been shrouded in shame and that historically left women suffering in silence. It can be hard work and sometimes you do ask yourself “am I crazy” and then you read one grateful comment from a woman who says how much it’s helping her, and you keep going. I am immensely proud of the work we have done and will keep doing with my team and our agency partners, watch this space! 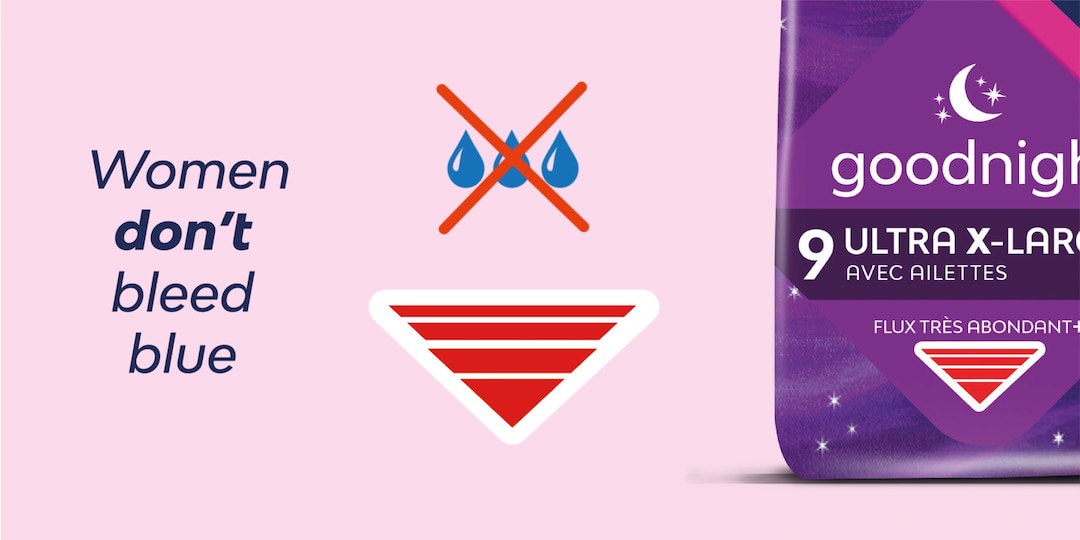